Welcome to Capital Account. Today, European Central Bank President Mario Draghi announced a bond-purchase program in the euro zone with no set limit. But why should you, who may be thinking about your future and your retirement, care about Super Mario’s latest policy response? Our guest Susan Fujii editor-in-chief of Kung Fu Finance and an SEC accredited investor says you can’t afford to ignore the macroeconomic landscape if you are trying to protect yourself in this new economic environment. She joins us to explain why.

Plus, Senate Candidate Elizabeth Warren had some tough words for Wall Street CEOs in her DNC speech last night, saying that despite wrecking the economy Wall Street Bankers “still strut around Congress,” demanding favors from lawmakers. But is it a little naive to think that the candidate you elect president or into any office for that matter will really change this situation? We think this is a bit naïve to say the least., and this is one example of the problem with political rhetoric when it comes to finance and the economy. If you believe the rhetoric and think everything will be fine, or believe that you can trust political institutions to take care of you, you may not do so well. Susan Fujii, investor and editor-in-chief of Kung Fu Finance makes the case for financial independence versus financial dependence to the government or your employer.

To give you just one example of why this should be on your mind…the United States Treasury Department this week announced the US national debt has surpassed $16 trillion. But how exactly are we supposed to wrap our heads around this? Millions, billions, and even trillions are bandied about as though they were pocket change, but can we really conceptualize what those numbers amount to? And the questions are unanswered as to what happens when interest rates rise and the government has to pay more toward interest and less towards other things? What happens if the globe loses faith in the currency? It’s these kinds of questions many of our viewers ponder quite regularly, especially when it comes to figuring out what kind of safety net exists for them during these very unstable economic times.

And so, our guest has made it her mission to help individual investors figure out how to build their own safety net and save themselves. Susan Fujii, editor-in-chief at Kung Fu Finance, tells us how. The immediate actions she believes individuals can take include investing in physical gold, keeping some cash on hand (something to use to buy assets if they go on sale!), and using trailing stops to avoid any major losses on your investments. .
economics 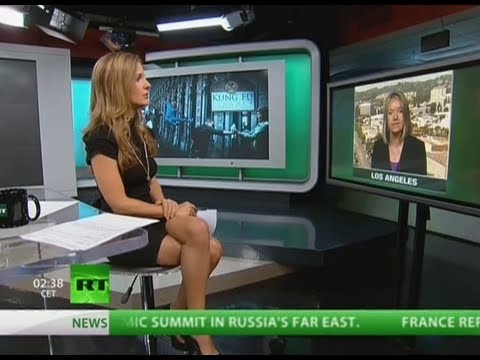 Medicine and technology – English Vocabulary in Use (Upper-Intermediate) technology english

How Financial Consultants help in Raising Funds and...

Securitisation & the Global Financial Crisis of 2007/8...

Great video on establishing your financial independence, I also made a video on the topic in my youTube Channel JoseBonillaShow

I checked out this video clip because I had gotten seriously anxious about the economy and had no clue what direction to go. Moolah does not mean a single thing any longer. Thus I made a decision to do a little exploration and found Goldiverse. I'm so fortunate, I have the ability to change my personal savings from cash to various currencies, to any precious metal at any time I would like. The lawmakers can go and take a jump for all I care. Just Bing it Goldiverse.

“Fortunate enough” how many of us are fortunate enough?
One wins and thousands lose. Got it?
If all win who is losing?
One cannot create something out of nothing except for God or US brilliant economists.

DEbt on that catastrophic level is only possible by leveraging & derivatives..
The banks 'Fractional Lending'..scam… was always dangerous.. it might work in a booming economy…but that never lasts.. We have been scammed, robbed, betrayed, deceived & ignored. now we're stuck with 100's of $trillions in their debt… And no one goes to jail.. The politicians protect the investment banks…
We must get back to honest basics… kick the bumbs out.

A podcast would be awesome.

This interviewee has some interesting ideas. Still, she looks like one of The Stepford Wives! 🙂

I am in love with you Lauren

"resource based economy"
Oh, Communism. Why didn't you just say so? Why are you hiding your Communism behind funny names?
You do realize that Communism has been tried, and failed miserably every time?
But really, you go right ahead and do it. If by some fairy magic it works "this time", and is in fact more efficient, people will join you voluntarily.
What are you waiting for?

true but great christian wakening will follow the economic collapse and then a new golden age. there is evidence that we are in the being stages of a great wakening.

They was Kung Fu fighting , Them cats was fast as lightning .

An audio only podcast would be fantastic, then I could just sync it to my iPod (:

Making a podcast version wouldn't involve any more than dumping the audio to an mp3 and adding it to an RSS feed. Your show is by far the best financial show anywhere.

People with lots of cash will lose their wealth. Inflation will destroy the value of the currency. People that add real value will make money. Farmers, and machinst would be good examples.

So, Nulla, how do you propose to prevent "money"?
How will I know how many chickens I need to buy a horse? Or how will someone in the next village trade with me unless we have a medium of exchange?
Really, I want to know. If you are going to say "money" is wrong, then WHAT IS RIGHT?

Why are you angry?

All this economic advice is good and well if you have cash, but most don't. What they are saying is if you haven't got any money you are screwed now and more screwed later.

would you be interested in supporting this unqualified assertion?

This guest can "master her mind" by at least not using the phrase "You know" every third word.

Hyperinflation didn't happen back then because there was a real economy to fall back on, we still had most of our essential manufacturing. The job market was difficult for anyone not in manufacturing because it was decimated with bankruptcy thanks to high interest. After the crash high interest rates were added in to the cost of production..prices rose greatly throughout the 80's. Today we have no real economy to fall back on, and when your economy is gone so is your currency.

So look up Mises and Rothbard.
Go to Youtube/user/MisesMedia